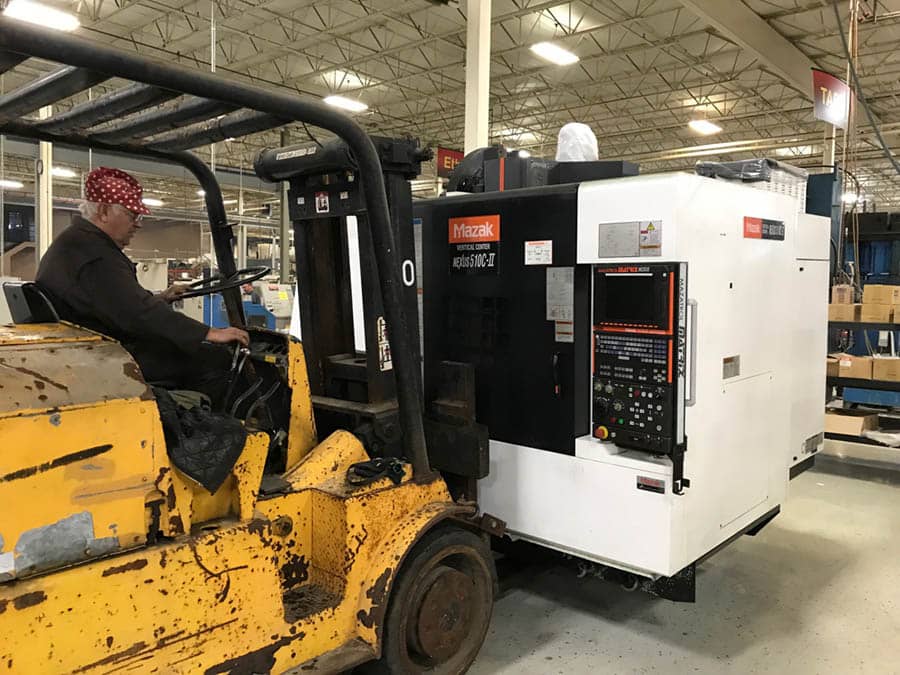 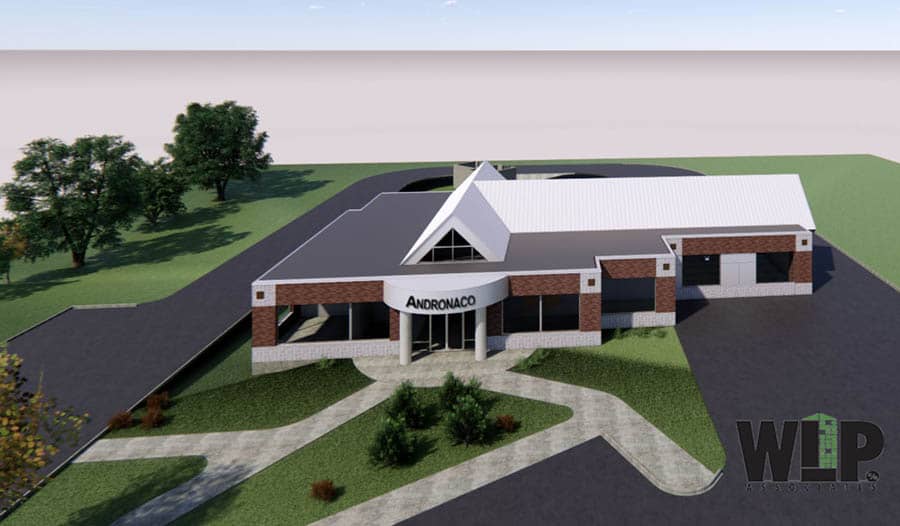 July 22, 2019 - PUREFLEX, an ANDRONACO INDUSTRIES Company to be honored as a "Top Supply Chain Contributor" by Bechtel Corporation. 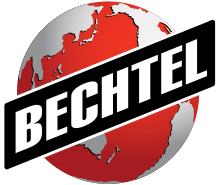 PureFlex will be honored at Bechtels company award ceremony on October 3rd in Reston Virginia for providing it's outstanding quality process system components as a valued part of their supply chain. 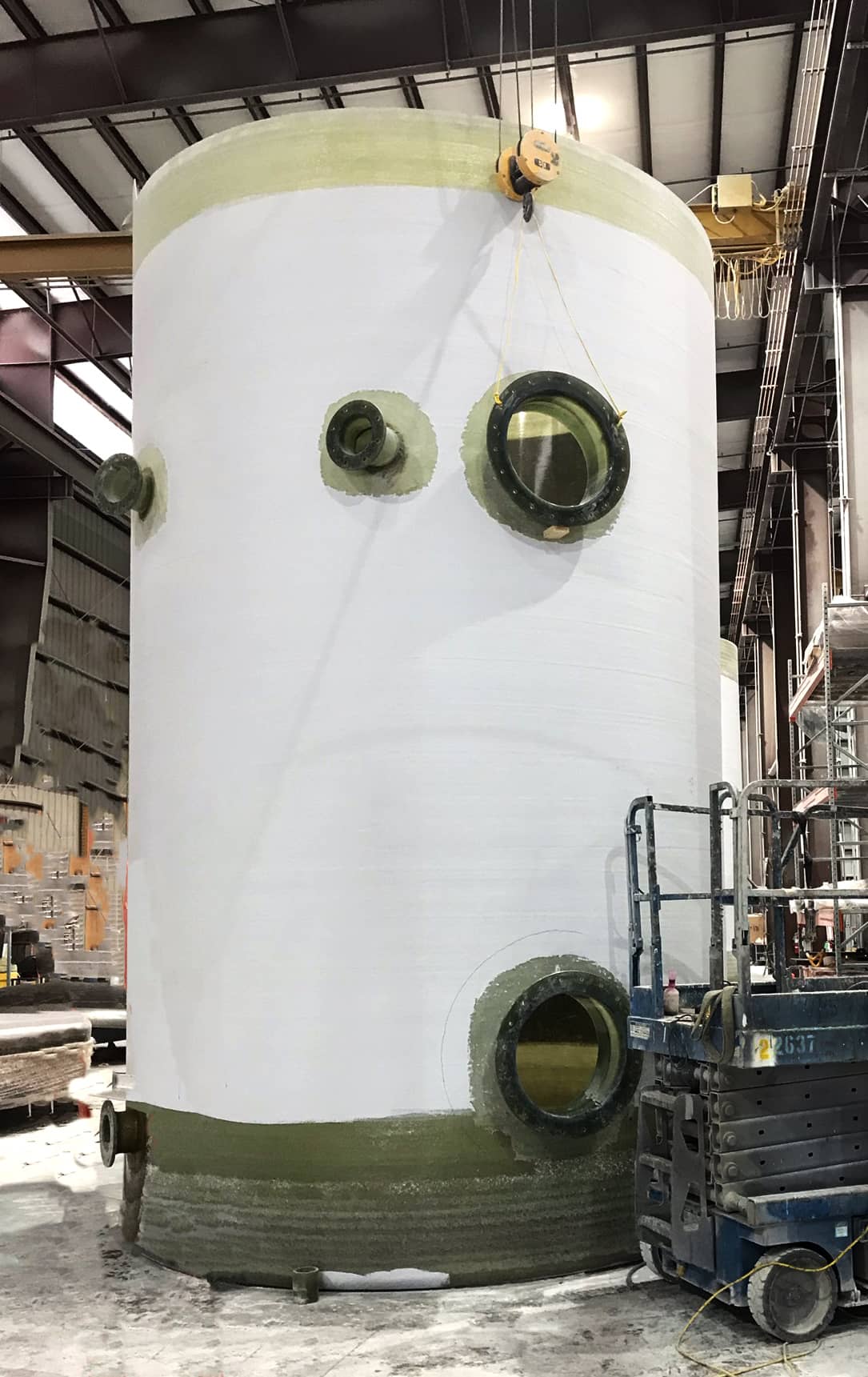 Endurance Composites, LLC, an ANDRONACO INDUSTRIES company, has acquired the composite and dual laminate tank, pipe and fitting operations of Enduro Composite located in Pearland, Texas. The purchase also includes the Vesca Plastics brand. Endurance Composites will continue to operate out of the 80,000sq. foot Pearland facility with the same great team-members and equipment. 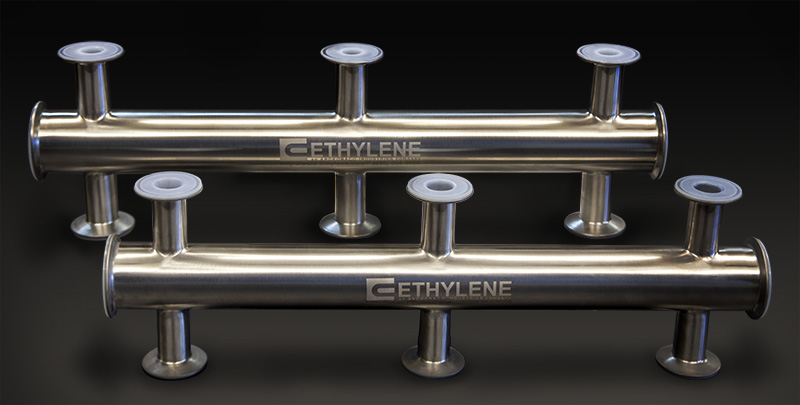 ANDRONACO INDUSTRIES releases another innovative lined piping product; TriPure™. The piping system is designed for those applications that need to be assembled and disassembled quickly for cleaning using a standard tri-clamp. Available with an ETFE lining for excellent chemical resistant at temperatures to 350F. All fitting styles are available. Literature to follow shortly. 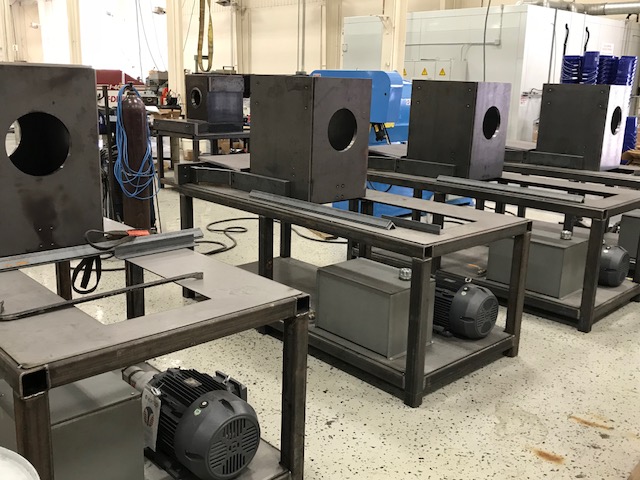 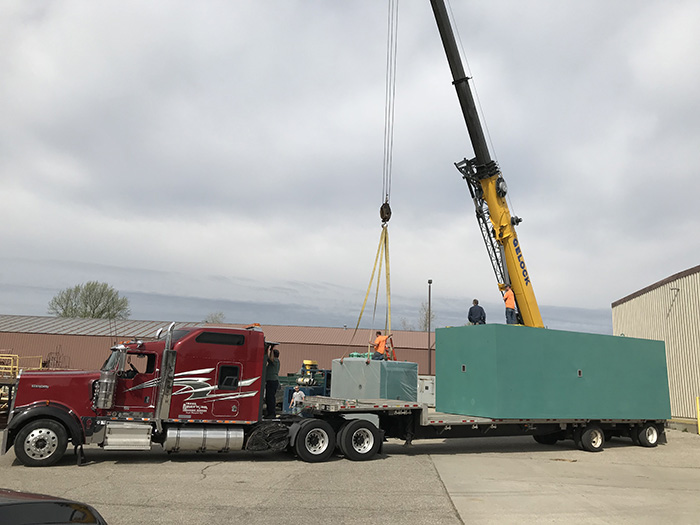 Ethylene is increasing its lined steel pipe production efficiency with new and advanced equipment. The investments will provide Ethylene with the benefit of providing the highest quality lined steel piping products to its customers at the lowest price point available in the marketplace today. 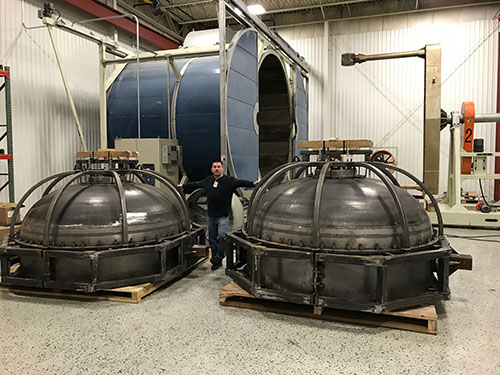 There is no other company in the industry that has the ability and offers a complete solution to handle corrosive fluids. From Hose, to valves, to lined steel pipe, to tanks and everything in between. ANDRONACO INDUSTRIES; Better Service & Better Products from one company. Single Source Corrosion Solutions. 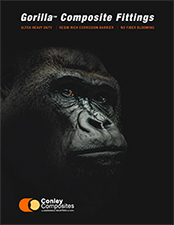 flanging machine for flaring schedule 40 steel pipe in sizes 1" to 8". Designed, engineered and manufactured in the USA at ANDRONACO INDUSTRIES 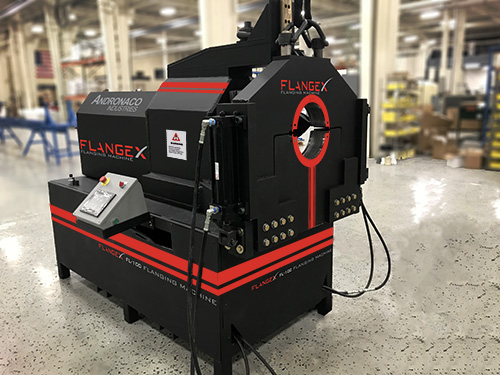 ANDRONACO INDUSTRIES has combined the best features of the simplicity of a M369 Conrac machine and the much better hydraulic clamping jaws of T-Drill flanging machine at a much lower price point. ANDRONACO also is the first to introduce a PLC controller to a flanging machine to replace the cumbersome mechanical limit switches in the Conrac. The PLC controller gives the operator the advantage of simple precise adjustment and control versus having to always readjust due to change in pipe size.

ANDRONACO INDUSTRIES is building (10) FlangeX flanging machines. The first (8) are designated for Ethylene ChemTite Lined pipe distributors and will always maintain a couple in stock for resale or lease. 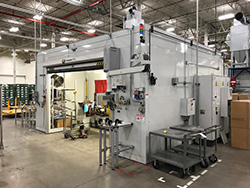 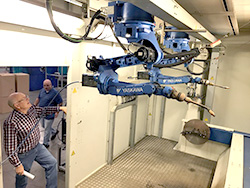 Two ANDRONACO team-members inspect the new Yaskawa Motoman robot welding cell. The dual robot welding cell will be used to weld Ethylene ChemTite PTFE steel fittings as well as steel/stainless tanks that ANDRONACO lines with ETFE, PFA, PVDF and other plastics. Replacement cost of the welding cell is over $650,000 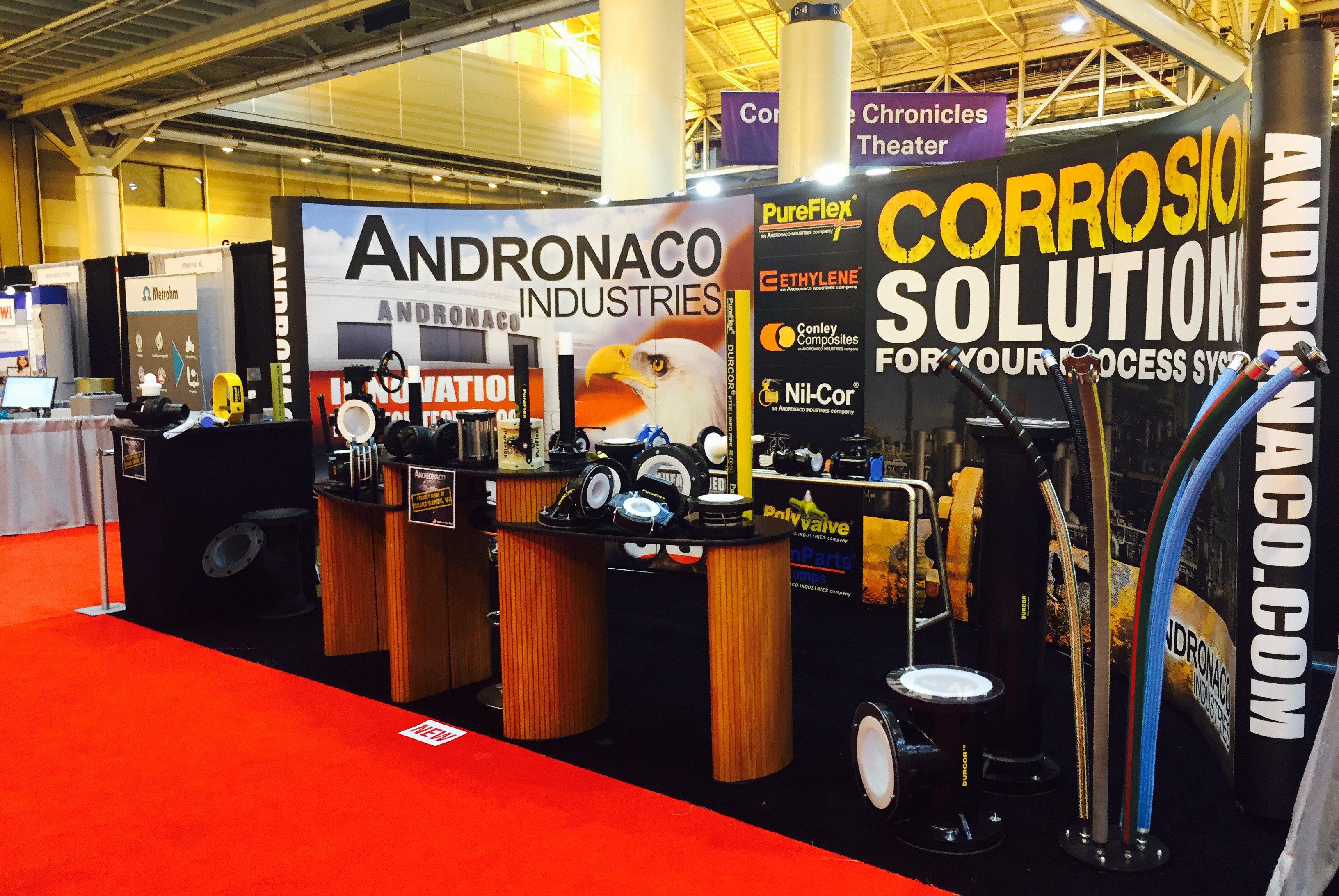 Flowcor LLC, an ANDRONACO INDUSTRIES company, is pleased to announce that we have acquired Flowcor Products Inc of Louisiana. Flowcor Products Inc. is a recognized leader throughout Louisiana and surrounding regions as one of the best "specialty distributors" for corrosion solutions and other outstanding process equipment to meet the challenging requirements of their business partners. Timmy Medine will lead the organization as General Manager. 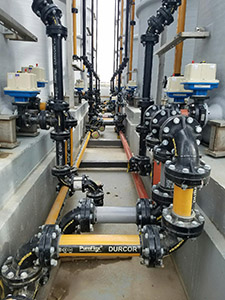 A massive installation of Durcor® PTFE Lined Structural Composite Piping System is wrapping up at a major American steel plant. 1,000's of feet of Durcor® pipe & fittings, Durcor® manual and automated valves and Ethylene™ PTFE Flexijoint expansion joints were used on the project. Comments from the end-user and contractor:

"Things could not have gone any smoother, the Durcor® piping system is great to work with and the service at ANDRONACO INDUSTRIES is fantastic".

Conley Composites LLC, an ANDRONACO INDUSTRIES company, is pleased to announce that we have acquired Conley Corporation. A leader in fiberglass pipe and fitting manufacturing. 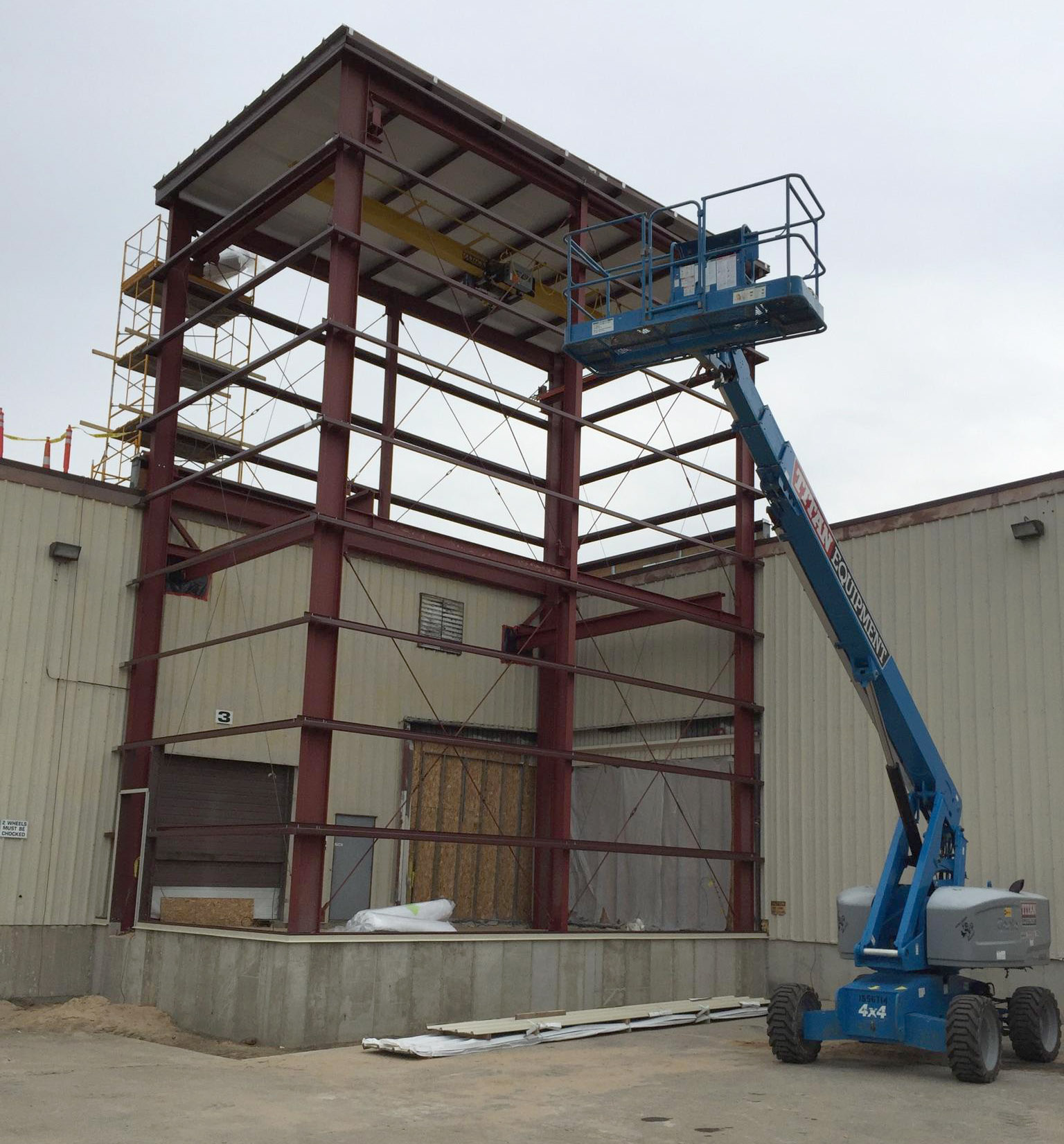 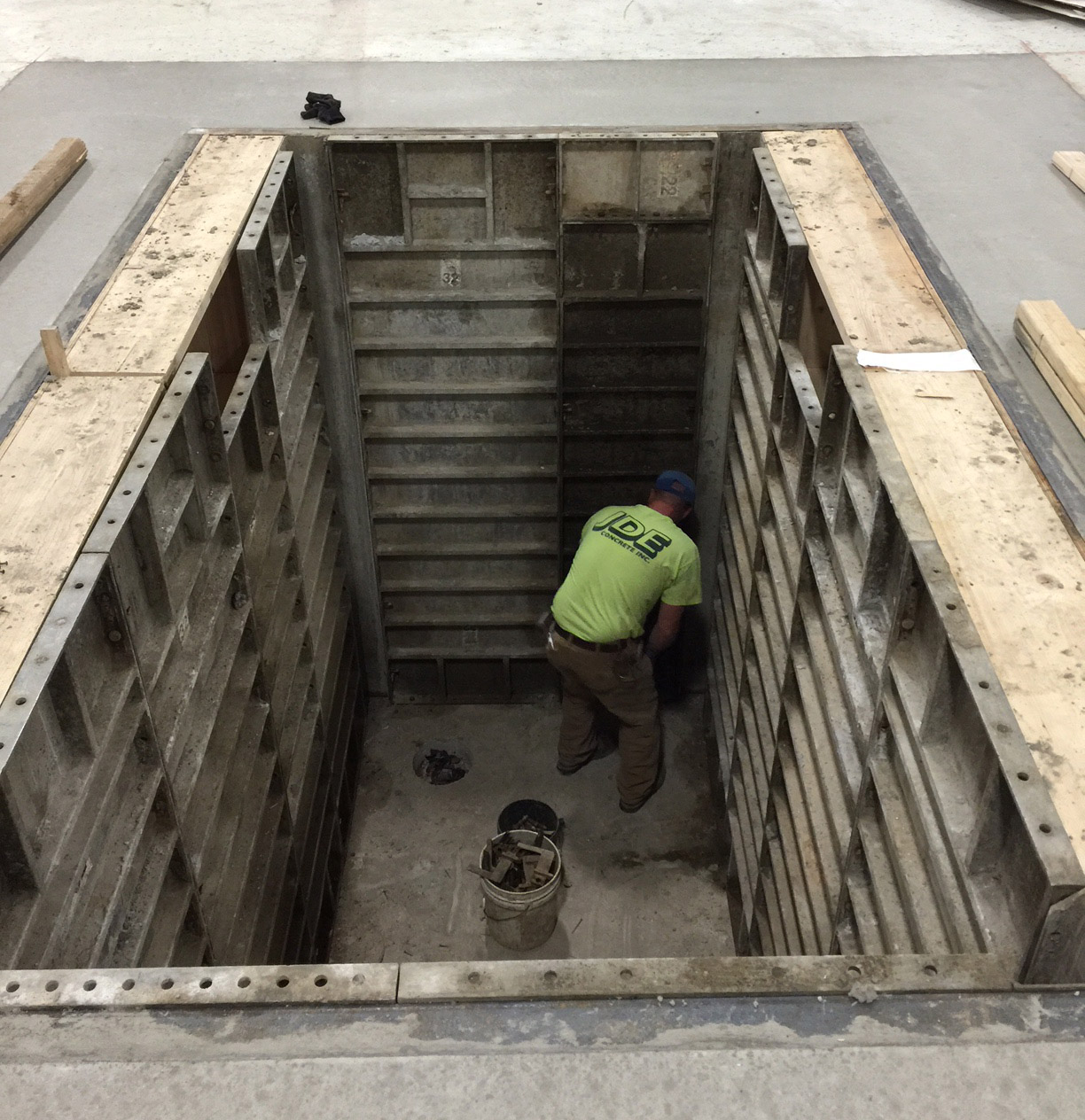 The new machines will increase the company's PFA molding capacities and other plastic molding capabilities to 36" diameter for its new product lines coming online in 2016. ANDRONACO INDUSTRIES is the world's most diverse processor of fluoropolymer technologies for chemical handling products. 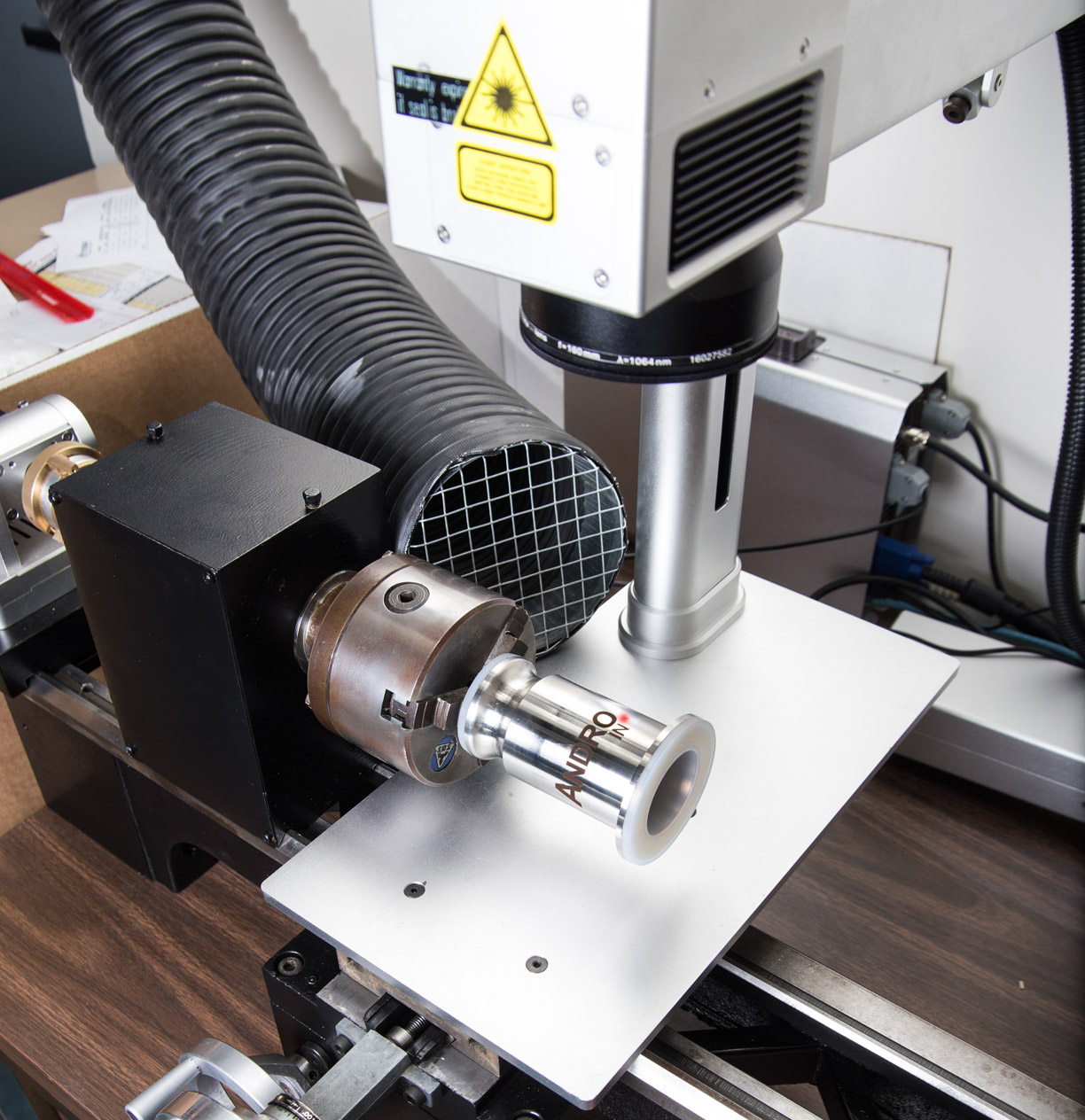 Expanding on it's industry leading manufacturing technology, ANDRONACO INDUSTRIES has acquired and put into production a laser etching/cutting machine allowing it to further enhance the quality and precision of it's innovative products.

This etcher/cutter will allow ANDRONACO INDUSTRIES to continue to lead the way in creating the highest quality process system parts and components in the world.

Hills-McCanna® Valves are made in the USA! Since 1931, Hills-McCanna® has earned a reputation for innovative products that serve demanding applications better than before. Today, the Hills-McCanna® legacy continues with the ChemTite® series. ChemTite® products are built with American quality for peace of mind and dependability in tough chemical applications. 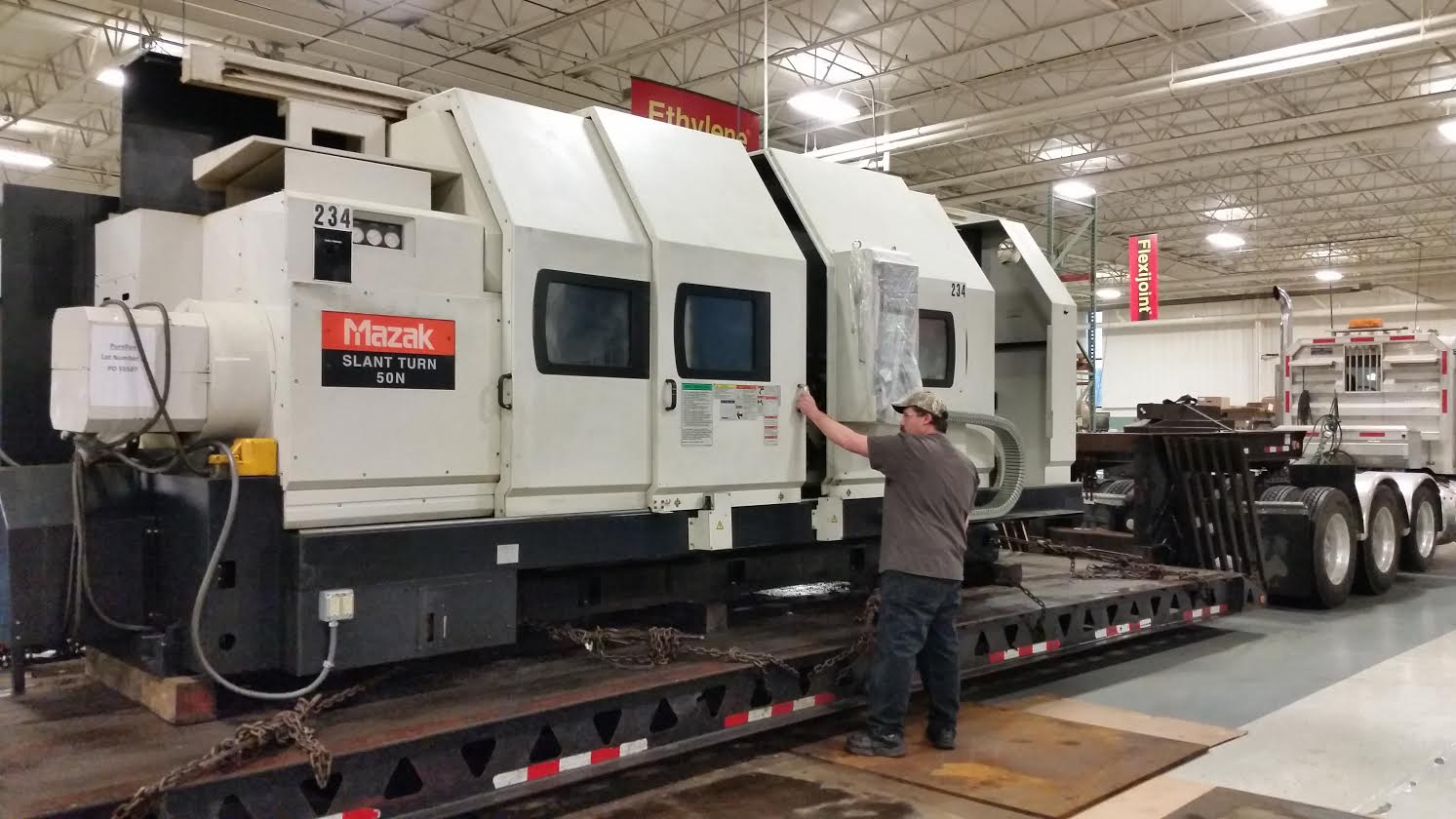 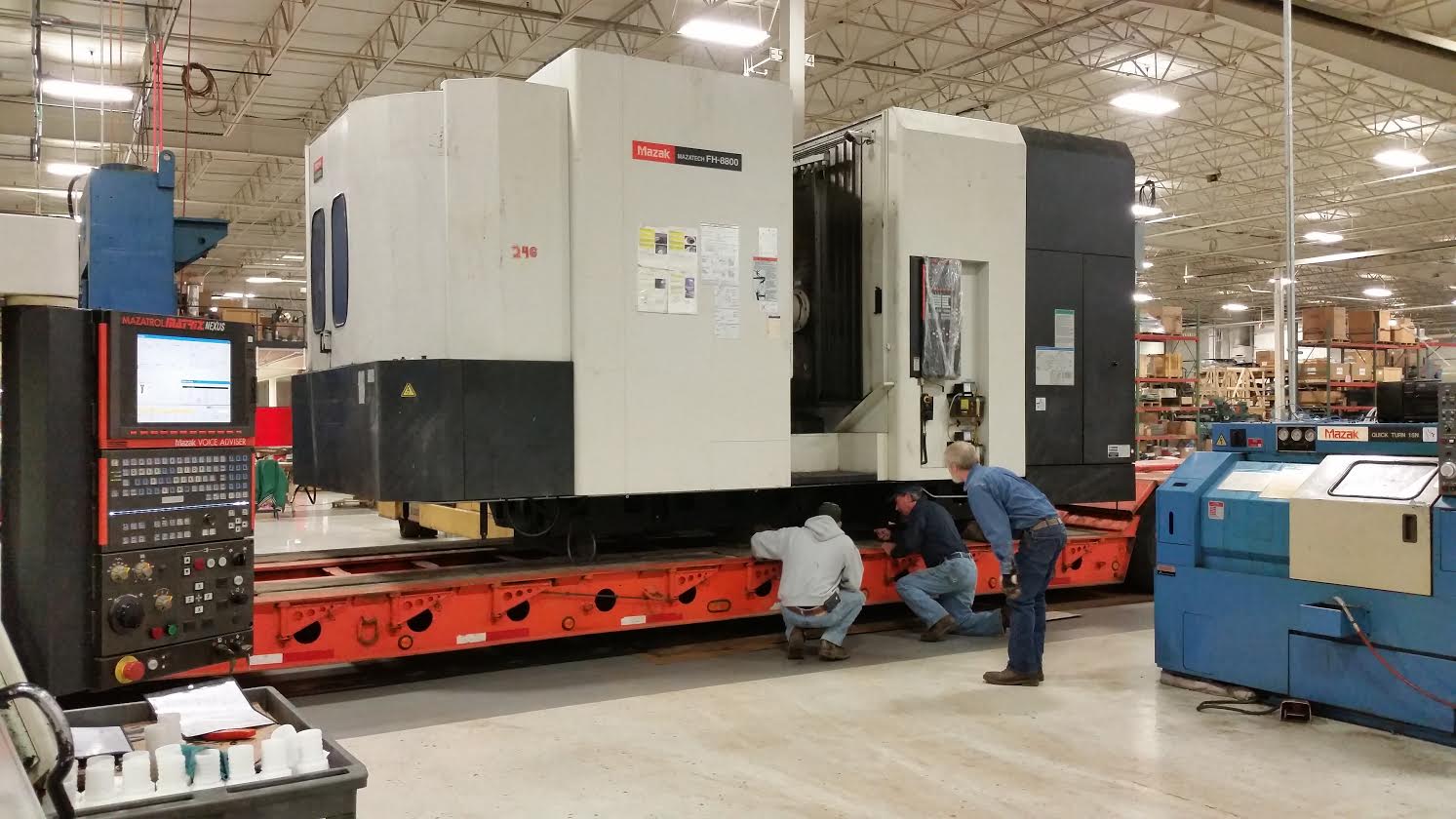 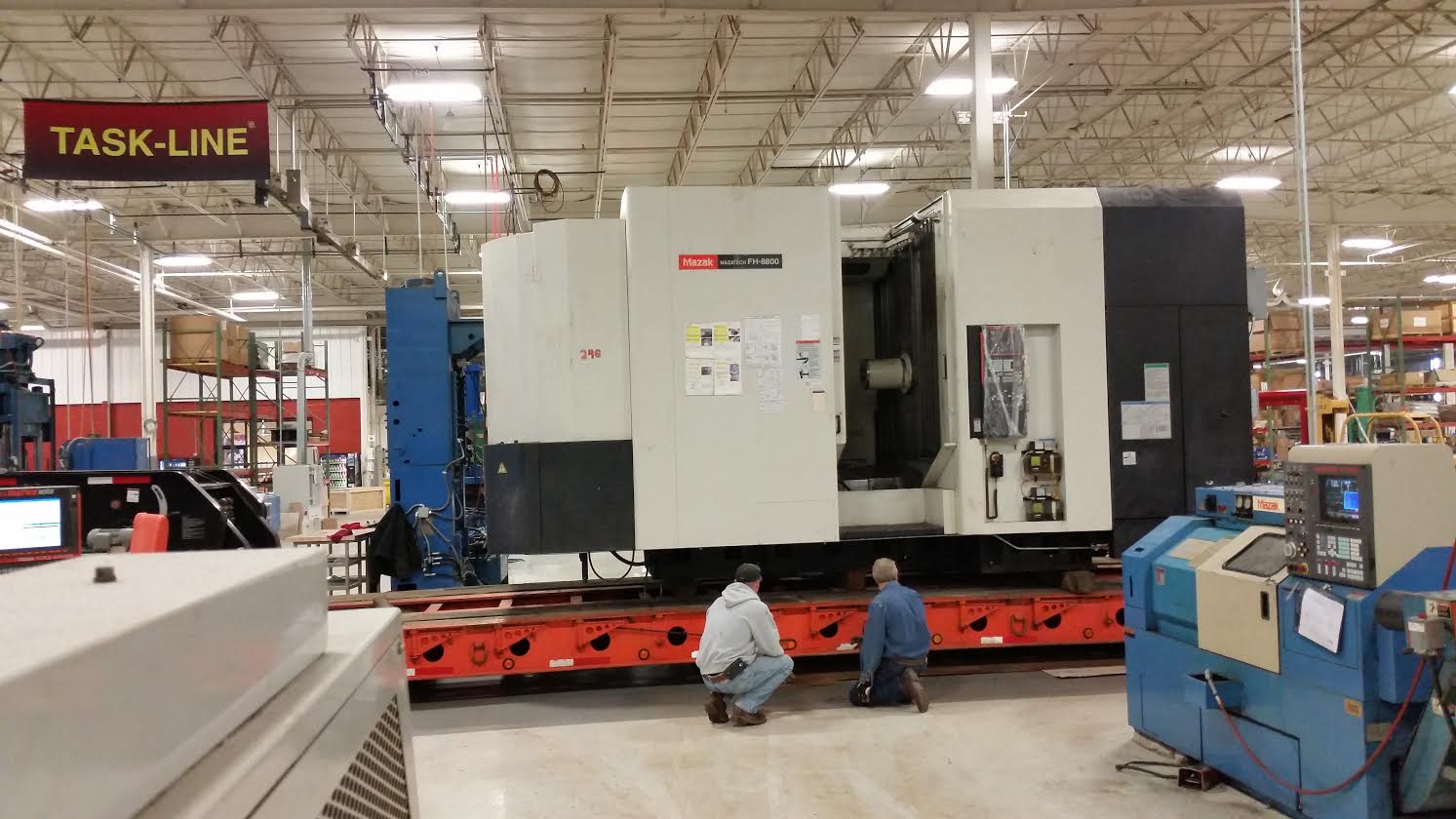 ANDRONACO INDUSTRIES has acquired two new massive Mazaks for its upcoming product lines. With a replacement cost of over $1.2m, the Mazaks greatly increase the company's machining capacity and efficiency to levels no competitor possesses, giving us the ability to turn 32" diameter parts that are 129" long, as well as mill parts up to 51"x43"x39" on the twin pallet machine.

Shipping begins on $500,000 Durcor® pipe and fitting order to a Indonesian paper plant.

We are pleased to announce the acquisition of our fourth manufacturing site in the Grand Rapids, MI area. The new building is 122,000 sq. feet and brings our total manufacturing floor space in the USA and France to over 500,000 sq. feet. The new building is needed for new processes and product lines the company is currently developing that will continue to fuel its rapid growth.

The new company will be a "Bolt-On" product for PureFlex Inc. and sold as PureFlex bellows / metal expansion joints. The acquisition will allow us to be more self-reliant and provide improved service, quality and delivery times while expanding our product catalog.

PureFlex is breathing new life into a vacant building on 44th Street.

PureFlex, an ANDRONACO INDUSTRIES company founded in , will expand a new line of production into the former MacDonald's Industrial Products site at 4242 44th St. Nil-Cor, another Andronaco Industries company, also will occupy part of the building.

Renovations have started and should be completed in the first quarter of , according to Ron Andronaco, founder of PureFlex and ANDRONACO INDUSTRIES.

He expects to hire an additional 12 to 20 employees.

PureFlex specializes in the manufacturing of fluid handling and sealing products.

"The building has good bones. The structure itself is sound," said Andronaco.

But the interior is in poor shape, and Andronaco estimates it will be a nearly $1.9 million investment to rehabilitate the facility and site.

"There is a tremendous amount of work that has to go into this facility. The pits are filled with water, all the plumbing has been smashed and destroyed. Wires have been stripped. It's a disaster inside," said Andronaco.

The nearly 100,000-square-foot facility has been vacant since . It was built in many phases, starting in 1967 with the last addition in 1997, according to Deborah Ring, city assessor.

In late , the property was listed for sale at $2.5 million. Since then, Ring reported the value of the property has dropped nearly 73 percent because of its obsolescence and physical deterioration from vandalism. The property's true cash value, Ring said, is $629,400.

There also is environmental contamination caused by the former metal plating use on the site.

Andronaco requested a 12-year rehabilitation certificate to help bring the building back to usable condition.

That means the assessed value of the building will be frozen at the current level of $629,400 for eight years, even though at least $1.9 million in improvements will be made.

"I'm a huge believer in renovating instead of building new. My company is 17 years old. We started with three people and 1,200 square feet. Today we have 150 people and more than 400,000 square feet of manufacturing space," said Andronaco.

PureFlex has facilities at 4617 East Paris Ave., and Andronaco Industry headquarters are at 4855 Broadmoor Ave.

Kentwood, MI. - February 01, 2011 - ANDRONACO INDUSTRIES today announced it has entered into a binding agreement to acquire the Polyvalve business, a leader in polyethylene ball valves for natural gas systems, from Flowserve Corporation. Flowserve currently manufactures its Polyvalve business at its Sulphur Springs, Texas and Unieux, France locations. Polyvalves products have been recognized as a key component of natural gas distribution systems around the world and also service the water / waste water and chemical markets. The product line had revenues of $13,000,000 in . ANDRONACO INDUSTRIES will continue to operate the Polyvalves business located in Unieux, France; Polyvalves Texas operations will be relocated to Kentwood, MI and will create 20 - 30 new jobs. This is the 5th acquisition in as many years for ANDRONACO INDUSTRIES.

About FLOWSERVE CORPORATION - Flowserve Corp. is one of the world's leading providers of fluid motion and control products and services. Operating in more than 55 countries, the company produces engineered and industrial pumps, seals and valves as well as a range of related flow management services. More information about Flowserve can be obtained by visiting the company's Web site at www.flowserve.com.